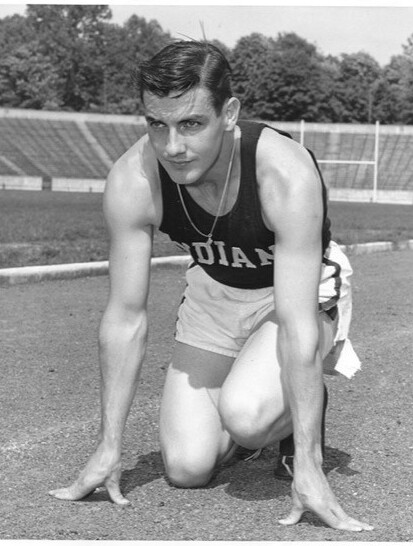 Charles Lindberg Feeney, 94, died on the Solemnity of St. Joseph, March 19, 2022, in Boise, Idaho, in the loving home of his daughter and son-in-law, Linda and Jon Morris.

Charles was born on March 7, 1928 to Michael and Essie Feeney, Pierre, SD. Charles’ father, Michael, was born in Co. Galway, Ireland, and as a child, immigrated to America. Michael had an appreciation for American history, naming several of his sons after historical figures.  They raised eight sons on the Feeney cattle ranch and taught them the value of perseverance and hard work.

When Charles “Lindy” was five years old, his father wrote a note saying Lindy would be a champion runner one day. Lindy went on to hold the South Dakota state record for the 100 yd. dash and became a Big Ten champion at Indiana University.

While a student at Pierre High School, Lindy met his future wife, Shirley Stampe. Shirley was his one and only. Lindy was a First Lieutenant during the Korean Conflict, and just before deployment to Germany, was married to Shirley in 1952 in Pierre. Lindy and Shirley had three daughters.

Lindy and Shirley moved to Huron, SD, and, in 1967, moved their family to Enderlin, ND, where Lindy eventually became owner of Citizens’ State Bank and Peoples & Enderlin State Bank, consolidating the banks into one.  Lindy enjoyed working with his customers until he retired at age 78.

Lindy’s greatest love was for God and his Catholic faith. As a boy, Lindy went to “Sister School” in Ft. Pierre during the summers to learn about his faith from the Benedictine nuns. He was also a dedicated altar server. Lindy had a strong devotion to our Blessed Mother Mary and to his Guardian Angel. The past year he prayed each night to St. Joseph for a happy death.  His prayers were answered when a priest came to his bedside and administered the last Sacraments and Apostolic Pardon. “May the angels and saints lead him swiftly into Paradise and present him to God the Most High.”

Charles was preceded in death by his parents; brothers; infant daughter; sons-in-law: Anthony Deichert and Charles Elvrum, and his loving wife, Shirley (2017).

A Mass of Christian Burial was held in Boise, Idaho. Charles will be buried next to his beloved Shirley at Holy Cross Catholic Cemetery in South Fargo.

As a memorial gift, the family asks that you pray for the repose of Charles’ soul or consider having a Mass offered for him at your local Catholic parish.

“I have fought the good fight, I have finished the race, I have kept the faith.”