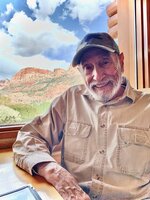 Rob was born in Chicago, Illinois, on January 6, 1935, to Walter and Frieda Knawa, his parents who are now deceased. He was preceded in death in 2004 by his first wife, Patricia, mother of his three children, as well as two great grandchildren, Ezra and Fletcher Kovach.

He began his early career as a draftsman, later working for Argonne National Laboratory. It was in this capacity Rob and Patti left Chicago for Idaho, where he worked on construction design projects related to the EBR II reactor at what is now Idaho National Laboratory. Rob’s expertise in containment design grew and so did his career, as he later worked on major projects of the Washington Public Power Supply System, the Institute of Nuclear Power Operations, and as a consultant. He loved to share fond memories of his grandfather’s farm in Michigan, and later enjoyed trying his hand as a “gentleman farmer” with a few acres, two horses and a few head of cattle, while working full time at the INL site.

Rob was also a fly fisherman, and a sports car enthusiast, having been a familiar face at Corvette Club events in Boise, where he met Adine Merkin, whom he married in 2007. The newlyweds made their home in Tucson, Arizona, and enjoyed traveling throughout the western states and Mexico.

In lieu of Flowers, please donate to the Hundred Club (www.100club.org), an organization that aids families of officers who gave their lives in the line-of-duty.