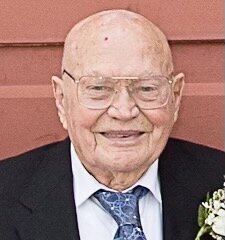 United States Army Air Force Staff Sergeant LaVere Albert “Al“ Hoffer, who flew on more than 80 missions between Burma and China in World War II, flew his last mission on August 15, 2021.  LaVere, 98, passed away peacefully, surrounded by the love of his family.  He served in the China Burma India Theatre 10th and 14th Air Forces in the 380 Bombardment Group.  LaVere was a loving husband, father, grandfather, prayer warrior, rancher, locomotive engineer, small business owner, avid sportsman and the type of man who was just as comfortable tinkering under the hood of a tractor as he was sitting behind the controls of a huge diesel locomotive.

LaVere passed away 29 days after his wife of 68 years, the love of his life, Katharine Lillis “Lil” Hoffer, and we know their reunion in heaven was a joyous celebration.  He was born on June 20, 1923 to his parents Edwin F. and Anna F. Pfeiffer Hoffer in Boise, Idaho.  The youngest of seven children, LaVere grew up on a rural family farm in Weiser, Idaho.  He credited his rural upbringing for his lifelong passion of hunting and fishing.  LaVere graduated from Weiser High School in 1942 and attended Winter Park College in Orlando, Florida.

LaVere and Lil were married on July 11, 1953 at Blessed Sacrament Catholic Church in Ontario, Oregon.  They moved to Boise in 1973.  In addition to serving as a locomotive engineer for the Union Pacific Railroad, LaVere was promoted to Road Foreman of Engines and Train Master in 1974, a position he held until his retirement in 1984.  LaVere was a man of many varied hobbies, from cheering on his Boise State Broncos, to rock collecting, metal detecting, and raising baby Chukars and Bobwhite Quail.  His greatest pursuit after retirement was his admirable skills and knowledge as a master gardener, including fruit and nut trees, cultivating a robust vegetable garden each year, and tending his favorite flower, the Dahlia.  LaVere and Lil enjoyed traveling, and spending time at their former homes in San Carlos, Mexico and Donnelly.

A lifetime member of the Benevolent Protective Order of the ELKS, LaVere loved his Weiser Elks Club, chairing numerous fundraising events through the years that benefitted the Weiser Senior Citizen’s Center.  Over the last 25 years, he became fondly known as the “onion man” for his tireless ministry of hauling and delivering 50-pound bags of onions from packing sheds in Eastern Oregon to the many food pantry missions in the greater Boise area.  LaVere’s great fondness for calendars connected him with many Treasure Valley businesses through the years as he exchanged his UPRR calendars each December for his favorite designs, including Norman Rockwell and Charles Russell.

Lil and LaVere were life-long Catholics and remained devoted to their faith throughout their lives.  They were active members of St. Mark’s Catholic Church until a recent move to assisted living.  LaVere quickly became a favorite of the staff at Meadow Lake Village, offering kindness, good humor, friendship, an impromptu song, prayers and a caring ear and heart to all who entered their apartment.

The family wishes to extend our deepest appreciation to the wonderful staff at Touchmark/Elkhorn Assisted Living Facility, Keystone Health, and St. Luke’s Hospice and to the amazing caregivers and staff at BrightStar Care Boise, Visiting Angels and Touchmark Home Health & Home Care.

A Catholic memorial mass and graveside interment at Dry Creek Cemetery will be held in the future.  Accent Funeral Home is handling the arrangements.

To send flowers to the family or plant a tree in memory of Lavere Hoffer, please visit Tribute Store