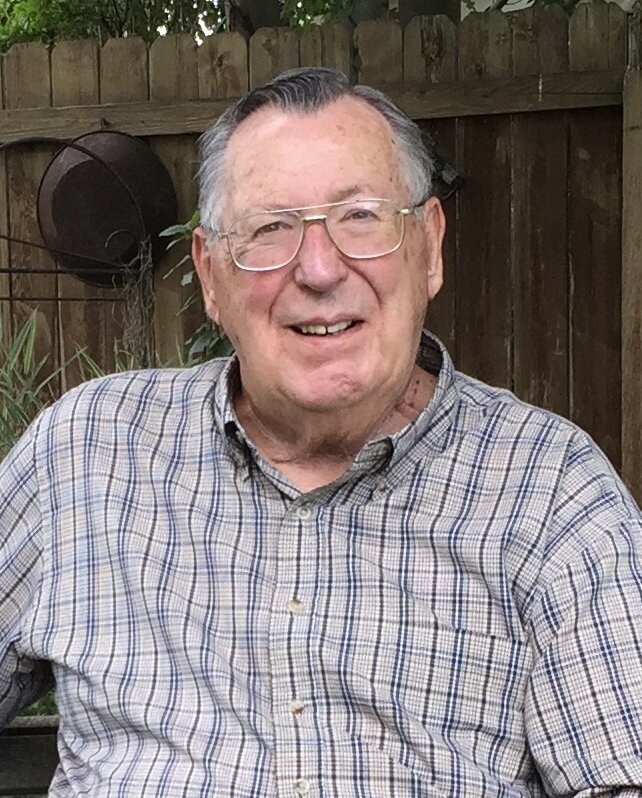 At home, in the early morning hours of September 16, 2021, with his wife Judy by his side Stephen Goodrich Wade went home to be with his Lord and Savior.  He was welcomed at Heaven’s Gate by his loving parents, seven brothers and sisters and his beloved first wife Carlene. What a joyous reunion!

He was born in the small town of Yamhill, Oregon on June 9, 1934; the last of eight children of Guy and Meda Wade. Since he was the youngest, his brothers were always convincing him to do things that ended with him in predicaments.  One story he loved to tell was about a skunk and two of his brothers.  When all three of them arrived home their mother made them strip and leave their clothes outside. Another one had to do with a hornet nest. He ended up in a bathtub of water and baking soda and his brothers were in big trouble.

In high school he played every sport there was since he was a big tall, 6’3”, guy.  During those high school years he fell in love with radio and broadcasting.  After high school he graduated from Northwest Broadcasting School in Portland.  Broadcasting took him to Baker City, Corvallis, McMinnville and then to Wenatchee.

With the draft breathing down his neck he volunteered for the Army.  He again was in broadcasting as a Broadcast Specialist producing radio programs for the local area and world-wide via the Army Hour. During his off hours he earned his private pilot license and joined the Fort Ord Flying Club.

After discharge he headed to KREM-TV in Spokane and established a farm program as well as a Saturday morning kids program as Major Orbit. During this time he met and fell in love with a girl from California, Carlene Smart. After a whirlwind courtship they married in December 1959.

His reputation as a farm broadcaster became known at the U.S. Department of Agriculture in Washington D.C. and in early 1964 the family, now three with the birth of their son Stephen Guy in 1961, were off to Washington D.C.  As the Public Information Specialist, in the agency which administered farm support programs, he had a part in the USDA’s taped radio and TV services.  After a few months he was assigned to be the Information Officer in various areas of the United States.  Travel, virtually everywhere in the country, soon became part of his job since he was assigned to the advance team to the Secretary of Agriculture on speaking tours.  While living in Virginia their second son, Scott Argalas, was born in 1964.

After ten years in Washington D.C. they headed back to the northwest and he accepted a job in Boise, Idaho with the Department of Interior Bureau of Reclamation as Regional Public Affairs Officer. He was very proud of his part in the planning of the 50th Anniversary celebration of the Grand Coulee Dam. He clocked many hours flying in a helicopter filming and producing various videos of the major projects for the Bureau.

In 1990 he retired and started traveling with Carlene in their 32 foot travel trailer. About that time he got his amateur radio license and loved making friends all over the U.S.  During each year they enjoyed visiting Carlene’s family in California and fishing with his brothers on the Oregon coast.

But the broadcasting bug still was calling to him and in the mid-nineties he worked for a local Boise radio station.

After retiring for the last time in broadcasting, he and Carlene traveled extensively and enjoyed their grandchildren here in Boise.

Sadly, Carlene passed away in 2004 after 45 years of marriage.  He continued to travel in his trailer to the Oregon coast to fish with his brothers and spend time in Boise with his two boys and their families.

In 2006 he met another California/Idaho girl, Judy Wheeler, on an online dating service.  Three months later they were married in front of family and friends in their backyard.  Together they traveled in their trailer fishing, camping and enjoying the northwest in all its beauty. They especially enjoyed their travels through the national parks enjoying each one for its uniqueness and making new friends along the way.  While at home in Meridian he gladly helped with gardening, canning and being the handyman around the house.  He never turned down a challenge and was game to travel at a moment’s notice. After they cruised to Alaska and Hawaii he was finally able to say that he had visited all 50 states. Their 15 years together was full of adventures and most of all love for each other.

He loved his family so much and we will miss his sweet smile, bear hugs and most of all his presence in our lives. He was a man of integrity, had the patience of Job,  was full of kindness but most of all a Christian.  He was a member of the Church of Christ.

I will remember my Dad as a kind and gentle Christian man.  He had many different talents and skills that complemented his vast knowledge.  Dad spent a lifetime of service in every aspect of his life.  His family, friends, church community and country benefited from his creativity, experience and hard work.  Dad’s selfless sacrifice of service, especially to his family and church, inspired me to follow his example from my youth.  I will miss him dearly but can’t wait to see him in Heaven where his spirit will never die.  I love you Dad

To me, Steve was a gentle and soft spoken man.  He had a kind heart and loved his family very much.  Steve was always willing to help anyone who had a need whether it was family, a friend, or a complete stranger.  He was a great example of Christian service.  I will miss you Steve!

Steve was such an amazing man.  Every time I would see him I would say Hi to him and his reply was “Well Hello there”.  He always had a smile on his face and would help anyone if he could. I am honored to have such a wonderful father in law.  I will miss you dearly Poppie! I love you, Tammy

Grandpa Steve will be remembered for is joyful smile and demeanor.  He was good about asking how things were in my life whenever we were together.  He was also great about documenting our family memories and reminiscing about them from time to time.  One of my fondest memories was when we would go visit him and Grandma Carlene when we were kids.  One of our traditions was to walk to Albertsons near their house to get fudgesicles.  Along the way we would laugh at the quail as they ran.  Grandpa’s presence in our lives will be truly missed.

Grandpa Steve was a kind man who was always excited to see his grandchildren and later his great grandchildren.  He took a genuine interest in all of our lives and he was a joy to be around.  We will miss his cheerfulness and all of his stories.  Rest in Peace Grandpa

Grandpa was always there with a camcorder in hand ready to capture all of life’s special moments.

Being the youngest grandchild, I spent a lot of time with my grandpa.  He was one of the most caring people I have ever met.  I still remember when he came over to babysit and played Barbies with me.  Once I became a bit older and took up choir, he was always at my concerts supporting me which meant the world to me.  Whether he knew it or not, he influenced the person I have become.  I love you grandpa.

To my sweetheart Steve.. I know the Lord sent you to me and I thank Him daily.  I’m so thankful for your love and the time we shared together. I will cherish all the memories we made and look forward to seeing you again someday. Until we meet again…I love you!

To send flowers to the family or plant a tree in memory of Stephen Wade, please visit Tribute Store
Print
Tuesday
12
October