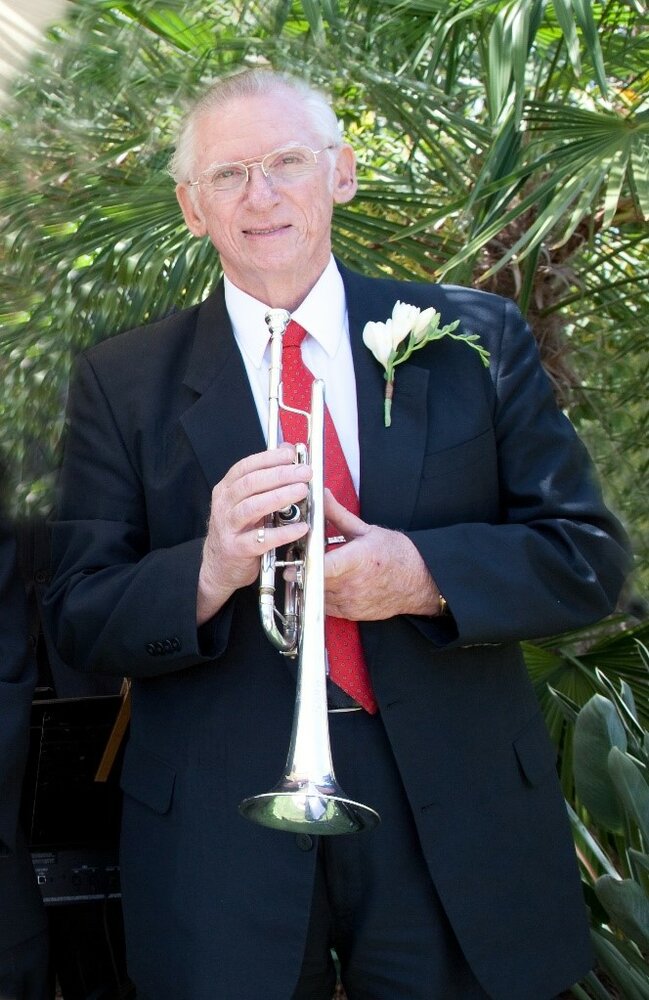 David F. Greeno was born in Chattanooga, TN in 1932.  His family moved to San Diego when he was 9 years old.  He passed away on November 14, 2021, from the effects of Alzheimer’s disease in Boise, Idaho, his home of the past two years.

Dave was a gifted musician who played trumpet, piano, and bass. He also had a talent for arranging music.  He earned his Bachelor of Arts degree in 1959 and his Master of Arts in 1969, both from San Diego State University.  He earned a state lifetime teaching credential for music education in grades K-12 and at the community college level. Dave taught for over 40 years at schools in San Diego.  He primarily taught music performance, as well as music theory, jazz history, piano, and music history.

Beyond his practice as an educator, he performed as principal trumpet with the San Diego Symphony Orchestra (21 seasons), the San Diego Opera Orchestra (17 seasons), and the Starlight Opera Orchestra (30 seasons).  He was the director of the brass group at La Jolla Presbyterian Church for over 30 years and he also performed with several local bands and combo groups.  He played at the World’s Fair in Brisbane, Australia in 1988 with the Tucson Concert Band and performed at the first International Brass Congress in Switzerland in the summer of 1976.  He was a life member of Local 325, American Federation of Musicians, San Diego.  Dave served in the United States Air Force, where his last duty station was with the 592nd Air Force Band in Fairbanks, Alaska. Dave enjoyed reminiscing about his travels as a musician and had many stories to tell.

Dave married Lois D. Siemsen in 1951 and they were together until her death.  In 1988 Dave married Joan Smith, who survives him. He is also survived by his two daughters: Julia (Keith) Lindsey and Janine (William) Loescher; two grandchildren: David Lindsey and Jonelle Lindsey; four step-daughters, four step-grandchildren and two step-great-grandchildren. He is also survived by his two brothers: Donald (Linda) Greeno and Joseph (Joan) Greeno. He was predeceased by his father, Luther Galyon Peace; mother and step-father, Louise and Jay Greeno; his first wife, Lois Greeno; son, David McLean Greeno; and one step-granddaughter.

The family is deeply grateful to those who cared for Dave over the past year: his dedicated caregiver, Pam whose patience was a gift; Joan’s daughter and son-in-law who provided tireless support; and to Hospice who brought comfort in his final weeks.

A memorial service will be held in the Sally Lynn Chapel at Greenwood Memorial Park in San Diego on Saturday, December 11th, at 1:00 pm, followed by a private burial service.  Donations in his name may be made to the Alzheimer’s Association, or to the School of Music and Dance at SDSU.

To send flowers to the family or plant a tree in memory of David Greeno, please visit Tribute Store
Saturday
11
December