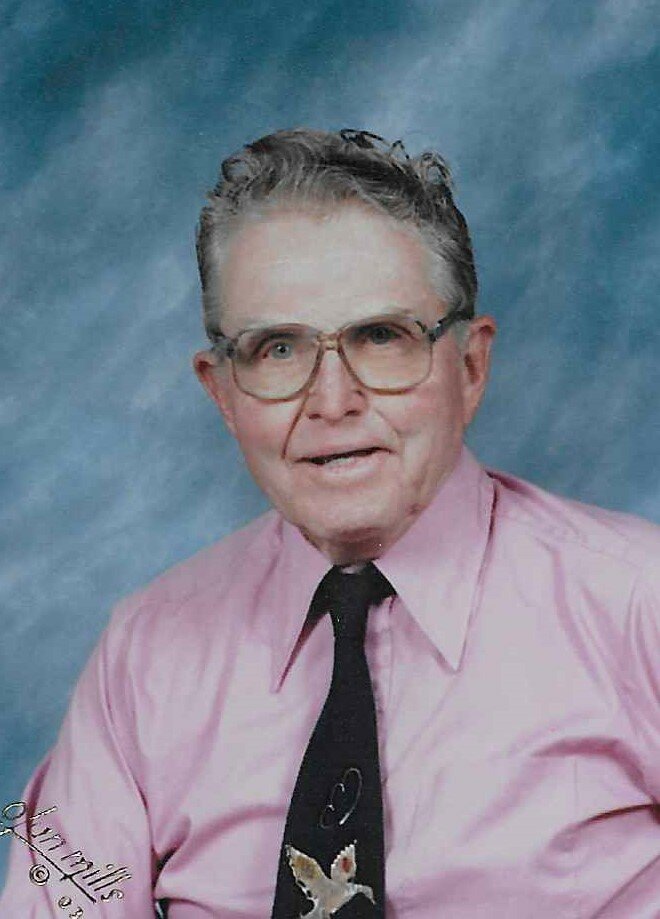 “God has blessed me with the best life ever!”

Paul Warrick made his debut on February 23, 1918, to his loving parents, Harry and Cora Warrick.  Paul joined his sister, Devona, and was followed seven years later by his brother, Harry Wesley.  Paul peacefully exited his earthly life at 104 years old on March 2, 2022.

Paul was engaging, a bright and precocious boy, the apple of his mother’s eye.  Paul was prone to adventure:  training his pet goose to chase his sister, forging his mother’s signature so he could take flying lessons at the age of 16, and taking the family’s new Model T (without permission) for a spin and rolling it on a nearby ditch bank.  Cora knew that this boy of hers was going to need prayer, so she poured her heart out asking God to protect and guide the heart, mind and body of Paul, her beloved son.  God graciously and immeasurably honored those prayers!

Paul loved school and excelled, graduating from Meridian High School in 1935 at age 17.  He planned to become a doctor or dentist, but the Great Depression interrupted those dreams.

Nonetheless, Paul was resourceful and industrious and was already a skilled butcher.  He took a job with Kings Packing Plant in Nampa and was quickly promoted to the prized delivery route serving grocery stores and restaurants.  With his knowledge and friendly personality, Paul was soon Kings’ top salesman.

Paul met Hilda on a blind date and she would say later that her heart skipped and fluttered at first sight of him.  He must have felt something similar, because they eloped and married on December 22, 1937.  Son, Roger, was born in September, 1938, and Ron followed in August, 1940.

The young couple took advantage of an opportunity to buy land on Amity Road across from Paul’s parent’s farm in 1940.  In 1942, with help from his Dad and his Uncle Judd, Paul built the house that would be their family home for 76 years.  Farming then became Paul’s second job.  Sandy was born in June, 1946, and Shirley completed the family soon after in December, 1947.

One of the Boise stores Paul delivered to was the Main & 5th St. Market.  The owners wanted to sell so Paul took a step of faith with a partner, who would oversee the grocery portion while Paul managed the meat department, and they bought the store.  The meat department, which included fresh seafood trucked in daily from the Pacific Coast, was legendary, and customers included three former governors and Joe Albertson himself.

After a few years, Paul, with three other investors, built the Thunderbird Motel and Restaurant on the NE corner of Capital Blvd. and University Dr. in Boise.  It was also during these years that Hilda acquired a few more cows, and the question of what to do about that was answered when Paul built a Grade A milking parlor with all the up-to-date equipment to bottle and sell Grade A raw milk in gallon jugs.  Hilda managed what was now Meadowlawn Dairy, and continued to increase the number of cows.  She sold her milk to Paul’s store, and supplied another small store on Vista and Overland, but most of her sales were made directly to customers from her home.

Paul and Hilda were very busy in business and with their growing children, who all participated in the successful ventures of their parents at the store and the dairy.

Another opportunity soon presented itself with the BLM’s Desert Land Entry in the Murphy area.  Paul, Hilda, and several other family members applied for, and were granted, 320 acres of desert land each, which now needed to be cleared of sage brush and made ready to plant and farm.  It was a marvel to see - five giant pumps were used to pump water out of the Snake River to irrigate the potatoes, onions and sugar beets.  For the first time, Paul thought maybe he’d “bitten off a little more than he could chew”, but with the support of his wife and family it became profitable.

Paul seemed to know when to get in and when to get out. Ah, don’t forget his mother’s continued prayers on his behalf!  Paul would agree again and again that God had helped him over and over! In 1974, Paul sold Main & 5th St. Market and the Murphy farm, and Hilda sold the cows!  Now they were retired with just their little farm again.  They toured Europe, went to Hawaii, New Zealand, Australia, and Alaska. It was during these retirement years that Paul served on the Idaho State Water Board, retiring from that position at 92 years of age, with the quip, “I felt I should retire before they actually wanted me to, it might have been tough for them to have to ask me to leave.”

Paul wasn’t all work and no play!  He loved practical jokes. Paul loved to laugh and tease his grandchildren, and entertained us all with his wild and true-life stories.  He was a man of adventure, actively hunting and fishing all of his life.  He took his two sons along for much of the action and they packed back in to many wilderness areas with horses.  Paul owned his own plane and he flew into areas he couldn’t reach any other way. There were annual deer and elk hunting trips that were nearly always successful.  Paul hunted and shot his last elk at age 92 with a black powder rifle.  Paul is among the few to have achieved the “Grand Slam” for Wild Mountain Sheep Rams.

A fishing trip to Alaska became an annual event Paul looked forward to and shared with family and friends.  He even had his prized salmon mounted and kept on the wall until the day he passed.  Paul sold his farm when he was 100 years old and moved into Morning Star of Boise Assisted Living at 101.

Paul outlived his many neighbors and friends, but those who knew him best would say he was God fearing, a gentleman, honest, generous, a man of his word, and someone you could count on.  He loved the Lord, his wife, his children, and his fellow man.  To us, Paul’s children, we thank him for teaching us how to work, help others, to laugh and play, to love even when it’s hard, and to enjoy and share what God has blessed us with.  Daddy would say often, “God has blessed me with the best life ever!”  We say, “God has blessed us with the best Dad ever!”  Paul was a lifetime member of Valley Shepherd Church and helped count the weekly offerings well into his 90s.

The family suggests that donations be considered in Paul’s memory to:

To send flowers to the family or plant a tree in memory of Paul Warrick, please visit Tribute Store
Friday
18
March