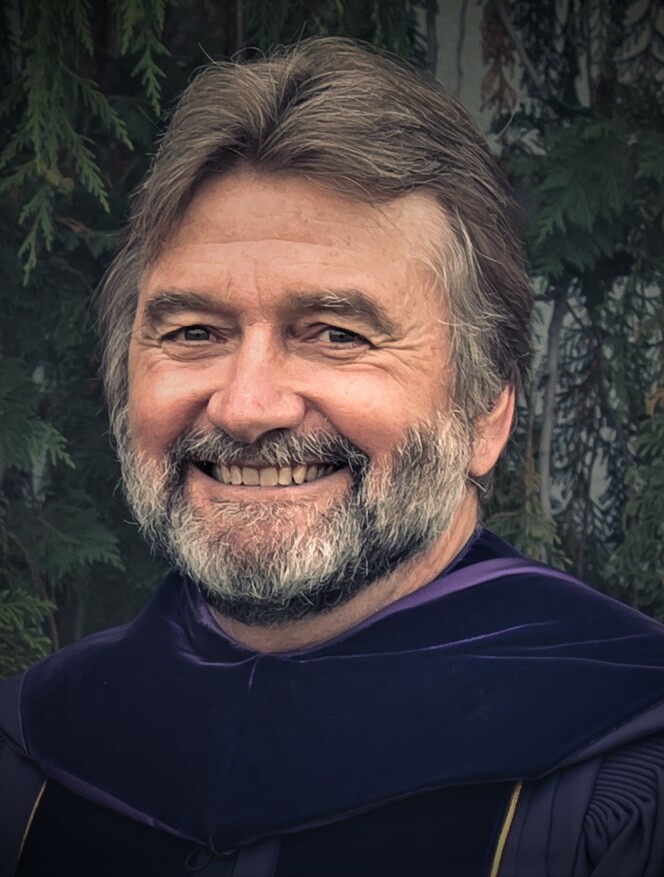 On the brisk Spring Break morning of Sat., March 26, 2022, Dr. John Alfred Smythe III (better known as J3) was heliskiing the pristine slopes of Utah with his two sons when amid the last run of their three-day ski trip, descending the untracked powder, having the time of his life, he abruptly skied to the side of the open mountain, carefully sat down in the gleaming sun-speckled snow, closed his eyes, and climbed into our Dear Lord’s loving arms. The coroner would list his cause of death as cardiac arrest.

John came into this world on Thursday, March 6, 1958, the youngest child and only son of John Alfred Smythe II (Jackie) and Charlotte Ruth Smythe. He lived with his parents and two older sisters, Debbie and Becky, in Vancouver, Wash.

This young Smythe family was dealt a heavy blow in 1964 when their father, Jackie, was killed in a car accident at the age of 32. Although John was only eight years old at the time, he soldiered on, even refusing to miss a single day of school. In fact, John graduated as a senior with perfect attendance for his entire 12 years of elementary schooling.

John’s little family entered a new chapter when his mother married Samuel D. Zimmerly. Sam would be the father figure John would remember most – the person who took him to church, drove him to the beach, taught him how to fix his bike and how to play practical jokes on other family members.

John grew up in an agricultural mecca. In the summers as a young child, he would pick strawberries in the fields with his mother for extra spending money.

As a teenager, he would drive tractor and move heavy irrigation pipes on the Erickson farm. This explains his sturdy neck and enviable biceps.

While attending Evergreen High School, John played the saxophone in the school band and was voted Student Body President. He also ran track and competed in the high jump event.

He was Captain of the wrestling team and qualified for the state tournament in the 148-lb. weight category. He was a chiseled specimen with bragging measurements of a 45-inch chest and a 28-inch waist.

John graduated from high school in 1976 and enrolled in the University of Washington’s Material Science of Ceramic Engineering program in Seattle. He had intended to pursue a career in aerospace, but upon graduating with his bachelor's degree in 1980, he found the government had curtailed the space program’s budget, so jobs were not plentiful. He switched to the semiconductor industry and was recruited by IBM to work as an associate engineer in Vermont.

In August of 1980, John married his high school sweetheart, Carrie Waffle and they gifted the world a bundle of joy that melted their hearts, John Alfred Smythe IV.

The Vermont way of life was a bit of a shock to John and his wife though. John did enjoy going cross-country skiing and building igloos in his front yard, but four years of battling New England’s frigid, snowy winters took its toll.

Soon after their son’s birth, John and Carrie returned to the Pacific Northwest, in Puyallup, Wash., where John took a position in technology transfer and thin films development engineering with Fairchild Semiconductors (which was eventually acquired by National Semiconductors).

When not immersed in silicon, John could be found at the beach lighting fireworks or hiking the Cascades with son in tow. He deepened his love for photography, even creating his own dark room, where he processed his captured images of their adventures.

Six years later, the couple parted ways and John was recruited by an Idaho company Zilog, Inc., for the position of Unit Process Development Director in Nampa.

Up to that point, in addition to being a scientist, John had been a sea-loving sailor. He had come up through the ranks as a Sea Scout and dreamed of mastering his own ship someday, idling his time away tending to her sails. He even grew a proper sailor’s beard, and his baby face would never more be seen. The sailor’s dream, however, encountered a substantial plot twist because his job with Zilog had brought him to the deserts of southwestern Idaho, where the closest body of water was man-made Lake Lowell.

It was at Zilog where John encountered his next challenge, his future wife, RaDawn.

John and RaDawn were not an obvious match. Both were entrenched, fiercely independent individuals. When John asked RaDawn out, she replied she could not. She said she didn’t feel comfortable dating someone “prettier” than herself. But John’s tenacity served him well and ten months later, after repeated attempts, RaDawn finally agreed to meet him for dinner at the Chart House.

Friends told them it would not last. Friends placed their bets. But the couple exchanged vows on Dec. 5, 1993, in front of friends and family in Boise, Idaho and proceeded to prove them wrong.

What can be said of the combining of these two? What can be written about a 30-year ardent romance cut short too soon? They were a force with which to be reckoned. Side by side, there wasn’t anything they couldn’t do. RaDawn had been told she wouldn’t be able to conceive. However, five years into their blessed union, a little bit of heaven was sent down in the form of their robust, precious, baby boy, Jared. The new parents soon realized the most precious jewels you ever have around your neck are the arms of your children.

Working full time and raising a family apparently wasn’t enough for John as it was also during this period that he decided to earn his Master’s degree and eventually Doctorate in Materials Science and Engineering from the University of Washington.

Then in 2002, John made his career move to the other side of the Treasure Valley with Micron Technology. He joined Micron as a senior technologist and progressively assumed more responsibilities as lead of the materials and process development group.  While he joined Micron in Chemical Vapor Deposition, he spent most of his Micron career leading projects in the Technical Development and Pathfinding Teams.

During his 20 years at Micron, John’s unique vision for new materials led to high-impact, innovative projects, some that have enabled technology for multiple generations.

When he retired from his 41 years in the Semiconductor Industry, John was Distinguished Member of the Technical Staff and leading pathfinding technology groups spanning all process technologies for DRAM.

In total, John was an inventor on 693 patents with 349 patent applications still currently pending. Along with these achievements, John served on the advisory boards of the Material Science Departments at the University of Washington and Boise State University. He also served on committees for a number of semiconductor industry conferences. Prior to his retirement John received the Career Achievement in Technology Collaboration Award from EMD Electronics.

Hearing this list might make one draw the conclusion that John was overly dedicated to his career. And while he did possess a strong work ethic, his first and foremost priority was always his family.

He savored evenings at home, building Legos, helping with math homework, and designing a botanical garden in the backyard. For other enjoyment, he cycled from Seattle to Portland (multiple times), tore through powder on the mountain slopes, scuba dived through coral, and hiked the trails of national parks. He attended his sons’ basketball games, volunteered at school events, stage-managed for his wife’s theater productions, and created N-scale train layouts with incredible detail.

John was fortunate to travel with his family to Iceland, Costa Rica, Scotland, Switzerland, Austria, France, and Mexico, and he excelled at tending to his Koi Pond. He Macgyvered everything and anything and could be seen every evening briskly enjoying his three-mile walk with his wife.

John had a deep relationship with his Savior and Lord. He never questioned whether the Lord was on his side. He was only concerned that he be on the Lord’s side.

John had a life-long love affair with macadamia nuts, Ben and Jerry’s Cherry Garcia ice cream, Star Wars, and all things Star Trek. He took great pride in watching his sons grow into remarkable young men, was overjoyed welcoming his daughter-in-law, Dana, into the family and delighted in hearing his granddaughter, Cora, call him PapaGa.

John came into this life a mere wisp of a thing, assessed his situation using his analytical superpowers, and set about engineering a better world for himself, his family, his friends, his industry, and his community. It is impossible to accurately quantify or measure in any way the immensely positive affect he has had on so many. And yet, the force he wielded was always conciliatory. It is said that the stronger a man is, the gentler he can afford to be. George Bernard Shaw said, “A gentleman is one who puts more into the world than he takes out.” Truly, our deeply loved John was such a gentleman.

A Celebration of Life for John will be held on Monday, May 30, 2022, at the Boise Train Depot in Boise at 1 p.m. We respectfully request that you not wear black as this will be a true celebration of a man who has always been a source of insight and reason in a world of chaos.

Services are under the direction of Accent Funeral Home and Cremation in Meridian, Idaho. The event will be available on Zoom by accessing https://client.tribucast.com/tcid/411923474.

To send flowers to the family or plant a tree in memory of John Smythe III, please visit Tribute Store
Monday
30
May