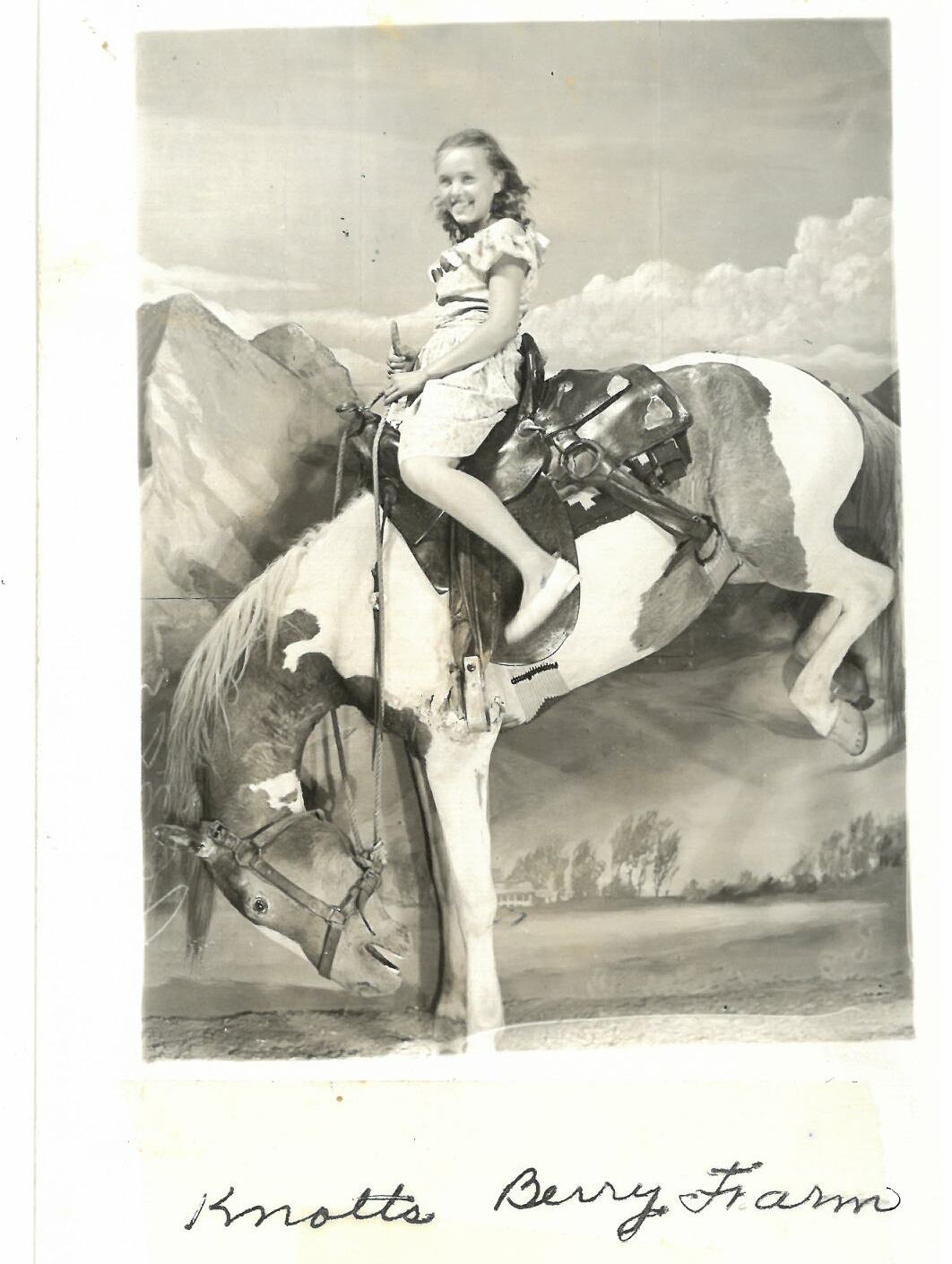 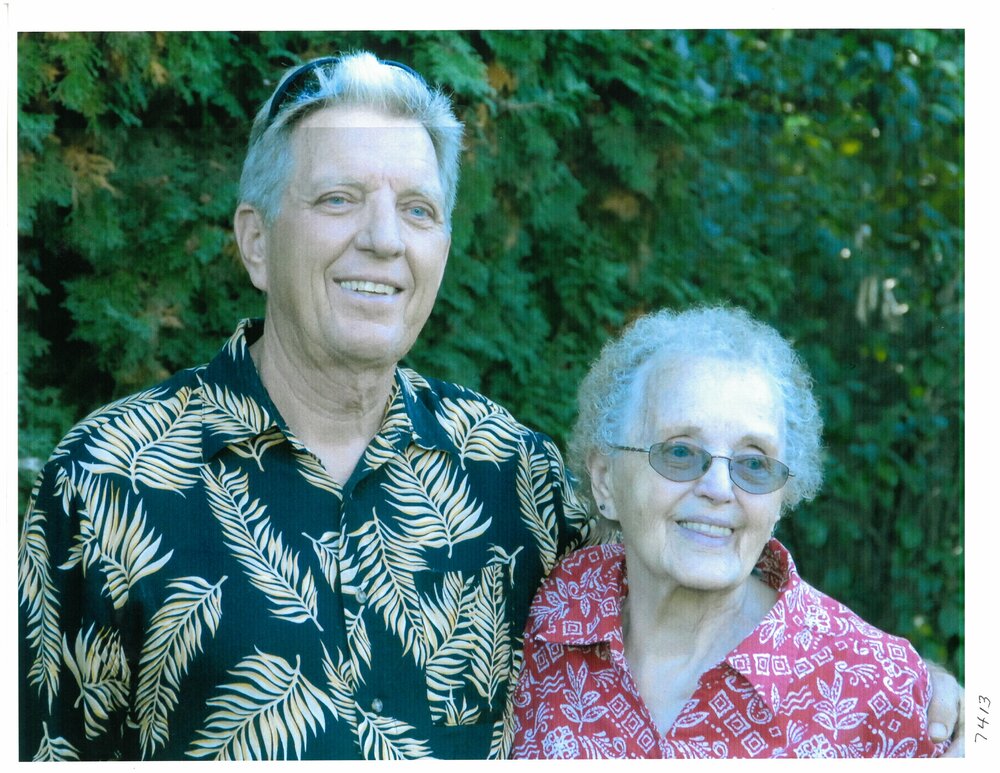 Glenda was born in Topeka, Kansas on October 7, 1936, to Glen and Loretta Williams, during the Great Depression.  As evidenced by the family photo album, by 1942 the family had moved to California and enjoyed days at the beach and Knotts Berry Farm.  There is a photo of Glenda sitting atop a bucking bronc at Knotts Berry Farm – if only her parents knew what that would lead to.

As a young girl, Glenda loved going to the “picture show” (admission: 10 cents) and never tired of watching old westerns (to her last days).  As a teenager, Glenda worked at the “pony rides” grooming, saddling, helping young riders mount and unmount the ponies, and back at the barn feeding, watering, and mucking stalls - a precursor of her adult life.  Glenda loved animals and through the years owned numerous dogs and horses, a few cats, a few mules, and apparently when young, she also had bunny rabbits (which may explain why mom and dad never let us have a rabbit!)

Glenda graduated from El Monte High School in 1954 and began a career with “the telephone company” or “Ma Bell” starting as an “operator” (and then promptly bought her first horse while her parents were out of town on vacation).

After a stressful day commuting in California traffic, mom and dad made a quick trip to Idaho and bought a farm.  The family arrived in Idaho on Christmas Day, 1969 - to an old one-bedroom farm house on 40 acres with a dilapidated barn in need of restoration to house the horses.  So, with 2 children, 2 dogs, 6 or 7 head of horses, and a plan to buy a milk cow, live off the land, the family’s Green Acres adventure began.  In the spring, alfalfa was planted, sprinkler lines installed, and a tractor purchased.  Soon, Glenda was driving the tractor mowing hay and sporting a farmer’s tan, but after a time, life changes forced her to go a different direction.

Glenda worked for a time at the Wilder Market and at Simplots.  And then, a position opened at the telephone company in Homedale.  Glenda was hired at Contel about the same time as the man who would become her future husband.  On July 4, 1975, Glenda and Walt were married at Carson City, Nevada.  They went on to enjoy 42 years together living life, fishing, camping, hunting, and traveling.  Glenda’s angling skills started with her dad, fishing on the shores of the Pacific Ocean, lake fishing in California and the streams, creeks, and rivers of Idaho.  Glenda and Walt enjoyed crappie, trout, and steelhead fishing and hunting big game.  From 1982 – 1995, they rode into the back country with horses and a string of pack mules to camp and hunt with their good friends, EJ and Brad, and sons, Jim and Al.  Glenda kept a diary of their adventures, and recorded tales of bear encounters, mouse encounters, and the 1987 wildfire that threatened their hunting trip, and freezing temperatures in October and wet, rainy days feeding the campfire.  After retiring from GTE in the spring of 1994, Glenda harvested her life-time Moose that fall.

When their elk hunting days were past, Glenda volunteered in the classroom with Walt teaching hunter education at the Homedale Rod and Gun Club.

Glenda was an accomplished seamstress, sewing western shirts to be worn at horseshows and parades, school dresses, office attire, and special occasion dresses.  As a youth, she used to embroider with her mother; she crocheted, tooled leather and entered her handiwork in local county fair exhibits.  She was also an avid reader – AVID.  In 2019, Glenda moved into the Meadows at Touchmark and spent almost every afternoon working on a paint-by-number painting, enjoying the fine detail of the work.   Glenda enjoyed the many life enrichment activities at Touchmark and was always game to join in dressing up for special occasions.  Her absolute favorite activity though, was loving on the therapy dogs when they visited!

Glenda was preceded in death by her late husband, Walter A. Rost; great grandson, Clayton Tully; and parents, Glen and Loretta Williams.

In lieu of flowers, the family asks that a donation be made to GoTeamDogs.Org (online) or by check to Go Team Therapy Dogs, 4164 Austin Bluffs Pkwy #212, Colorado Springs, CO  80918 or the Susan B Komen Foundation or American Cancer Society; Glenda was also a 21 year breast cancer survivor.

To send flowers to the family or plant a tree in memory of Glenda Rost, please visit Tribute Store
Wednesday
20
April