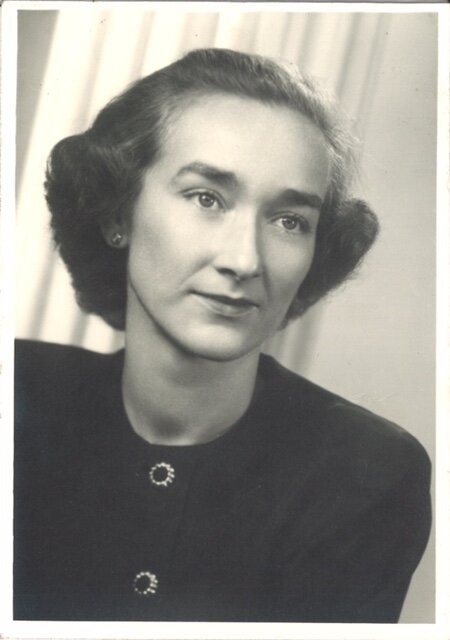 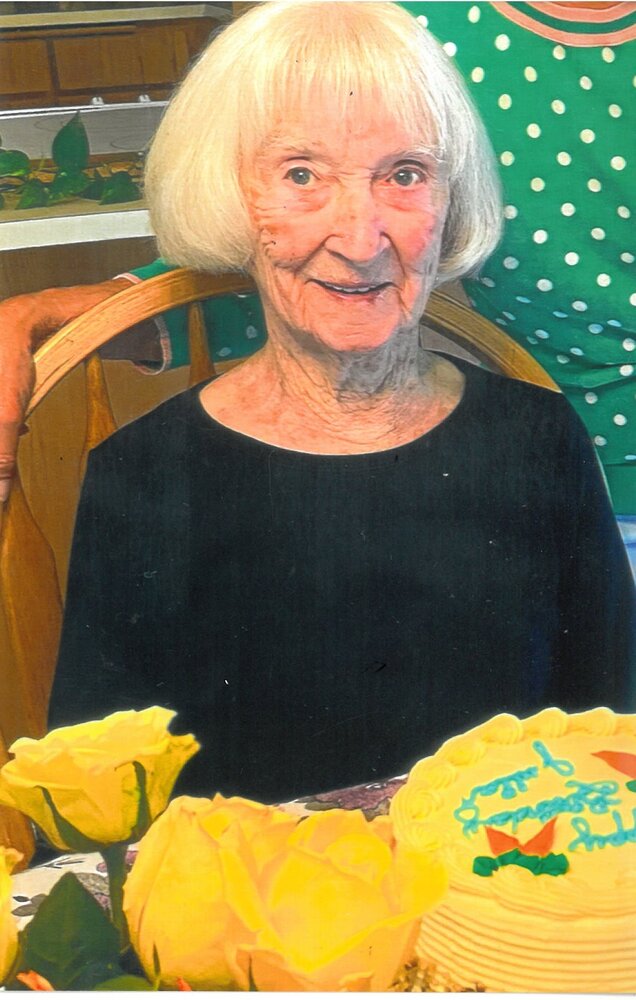 Julia, also known as “Julie,” was born on June 12, 1922, the third child of Hermenegilda and Jose Uberuaga, both immigrants from the Basque Country. After years of working in construction, including the building of Arrowrock Dam, Jose wanted to try something new. He and Hermenegilda first rented the brick house at 607 Grove Street. In 1917 they purchased the home and ran it as a Basque boarding house. Julia was born in the parlor of the home, which today is known as “The Cyrus Jacobs-Uberuaga House.” She grew up there with her sister, Serafina, (born in 1915), and her brother, Joe P., (born in 1917) and lived in the house until 1975.

Julia was baptized at St. John the Evangelist Cathedral and received all her sacraments there; it became her home church. She attended St. Teresa’s Academy, graduating in 1940. She attended Boise Junior College from 1940-1941 and then Boise Business College from 1941-1942. She was an exceptional athlete and played sports most of her life.  She played basketball, tennis and ping-pong while in high school and college and played softball in the Boise City League after high school. Julia loved watching basketball and tennis on TV. She was an avid reader and enjoyed books all her life.  She also loved crossword puzzles and filled in the blanks with an ink pen because she was so confident.  Julia wrote kind notes to friends and family, and her handwriting was famously beautiful.

To say that Julia loved to dance would not do her justice. She went dancing every chance she had.  She was very light on her feet. Of course, that was to be expected for any girl living in the Basque culture as Julia was. She had plenty of competition for best dancer from her many Basque friends and relatives. It was not uncommon for the family and boarders to move the furniture out of the way, find an accordion and a tambourine player—and it was dance time!  When they ran out of space in the house, the entire party moved out into the street (now known as the Basque Block).  This happened on many Friday or Saturday nights and most all holidays.  As a Basque dancer, Julia was on stage at Boise High in the 1949 Music Week performances of “Song of the Basque.” The “beautiful red-skirted dancers” were a highlight of the show.  Julia made many life-long friends—Basque and non-Basque--on the dance floor or getting together for any Basque event.

The Euzkaldunak purchased the garden area of the Uberuaga home on Grove Street and soon after began the construction of a bar, a card room and gathering place known as the Basque Center. They added the dance area and basement dining area shortly after that.  Julia, her parents and her sister and brother, Joe, were among the 516 charter members of the Euzkaldunak.  Julia and Joe served as a team as the first Secretary-Treasurer of the new organization. She was a life-long member of Euzkaldunak, as well as of La Organizacion Independiente Social. The house that Julie grew up in is now owned by the Basque Museum and Cultural Center, of which Julia was a member.

After attending Boise Junior College, Julia worked at Gowen Field for three years and then worked for Idaho Claims Service at 11th & Idaho Streets.  She worked there continuously until 1971 and then transferred to American States Insurance Company and worked there until 1975. What made her put a stop to her career?  Julia had begun dating her former college sweetheart. She had known Kenneth Coleman and dated him 30 years prior. They were pretty serious while at BJC, but the timing just wasn’t right.  This time around was different. When he and Julia became reacquainted, it was “love at second sight.” They were married on July 12, 1975, at the Cathedral of St. John the Evangelist. The newlywed couple settled in Santa Barbara, California, where Kenneth lived and worked for the U.S. Postal Service. Tia Julie had such a long wait for the perfect husband and beautiful marriage! Unfortunately, the marriage was cut short when Kenneth died on August 6, 1976, at the age of 56.  Julia continued to live in Santa Barbara where she took classes at Santa Barbara City College and worked part time at Holy Cross Catholic Church.  She enjoyed the company of her two Siamese cats, Mia and Ling-Ling, who ruled the house.  Julia took daily walks from her house to the beach in Santa Barbara.

In 2015 Julia moved to Eugene, Oregon and began the last journey of her life. She moved in with her niece, Faye Mendiguren Sadowsky, and her husband, Don. Julia became part of Faye and Don’s life in every possible way. They cared for her physical and mental well-being, daily activities, walks, trips, family get-togethers, doctor visits—everything that the Sadowskys did, so did Tia Julie. All of the sports and dancing that Tia did in her younger years rewarded her with a very healthy body. Julia was not sick a day of her life until she fell and broke her hip. She passed away shortly thereafter. She was truly blessed and was a blessing to those who knew her.

Because Tia Julie and Tio Joe were single most of their lives, the Mendiguren children were blessed with an extra set of parents who loved and cared for them. Faye Sadowsky repaid Julie the last six years of her life by the wonderful care she gave her. Thank you, Faye and Don!

Donations in memory of Julia Uberuaga Coleman would be gratefully accepted by the Basque Museum and Cultural Center (611 Grove Street, Boise, ID 83702) or by the Basque Center Foundation (601 Grove Street, Boise, ID 83702).  A funeral Mass will be held on May 5, 2022, at 11 a.m. at Our Lady of the Rosary Church in Boise (1500 E. Wright Street), followed by lunch in the parish hall. Committal services will be held at 2:30 PM at Morris Hill Cemetery.  Services are under the care of Accent Funeral Home and Cremation.

To send flowers to the family or plant a tree in memory of Julia Uberaga Coleman, please visit Tribute Store
Thursday
5
May