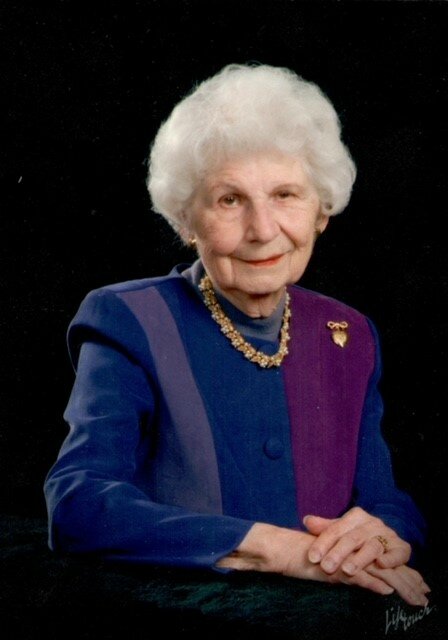 Loraine Evelyn Losser, widow of Rev. Carl Losser, was called to begin her eternal life on May 7, 2022 in Kuna, Idaho after 95 years of life.

They lived in Alexandria, South Dakota in the Lutheran parsonage until 1953 when her husband accepted a call to pastor a parish and school in Buhl, Idaho (Clover Lutheran) and later in Filer, Idaho (Peace Lutheran), Idaho until 1965. From Idaho the family moved to Sherwood, Oregon where her husband was pastor at St Paul Lutheran Church and School. After her husband's retirement from active ministry in 1982 they moved to Lincoln City, Oregon, where they had purchased a home in 1970. She and her husband, Carl, celebrated their 50th Wedding Anniversary on June 4, 1994. Carl died June 13, 1994. Loraine served as church secretary in the parishes in which her husband served for forty years. She also taught Sunday School, served in areas of education and evangelism, and was on the Northwest LCMS District Steering Committee for the congregation and Concordia University, Portland, Oregon.

Loraine was long involved in the Lutheran Women’s Missionary League (LWML) as an active member by serving in various positions at all levels. Loraine was appointed to the International Leagues Manuscript Review Committee for two terms, from 1979-1983. She served the Oregon District LWML as Chairman of Christian Life, Willamette Zone Structure Committee, and member of the Diversity Task Force. Loraine was elected President of the Oregon District from 1984-1988, an honor she held in high esteem. From 1988-1994 she was Chairman of the Bylaws Committee and member of the Structure Committee. Throughout her time in LWML she wrote and presented a variety of programs and devotionals, some of which were published in the LWML quarterly magazine.

At the community level, Lorraine worked with the Red Cross as a First Aid Instructor, secretary and disaster coordinator. She was also involved in the local Parent Teacher Associations and Moms and Dads club in Sherwood, OR.

The Losser home was open to many individuals, including Christian Day school teachers, relatives, friends, and family who needed a warm bed and home cooked meals. Loraine was always willing to give advice to those who would listen, often with a hint of humor. She never failed to collect the names of her visitors in countless guest books, as she loved to remember everyone who had come to stay.

Those who honor her memory are:

To send flowers to the family or plant a tree in memory of Loraine Losser, please visit Tribute Store