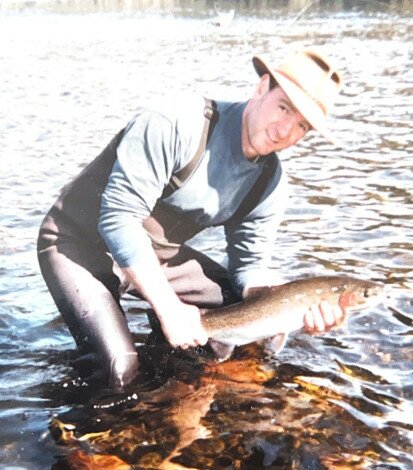 It is with great sadness that we share the passing of Kelly Jordan Sarbacher on July 18, 2022 at the VA Hospital in Boise, ID. He was born on December 2, 1958 in Great Falls, MT on a very cold winter’s day…as his mom always described it. After a few moves around the Northwest his family eventually made their home in Keizer, OR where he remained attending McNary High School and then joining the US Navy. While in the Navy he went to dive school and loved it until a diving accident left him with permanent hearing loss.

Coming home to Keizer after his 4 years in the Navy he landed a job as a hyster driver with Americold. Always ambitious, he rose quickly in the ranks at Americold, and was transferred to Idaho as a Logistics Manager and eventually managing two warehouses. When he moved to Boise he fell in love with Idaho and considered Idaho is permanent home. It was while working at the Ore-Ida headquarters that he met his future wife, Kristin Hoff. They were married and soon welcomed their adored son, Samuel Jordan. Another red head in the family!

Kelly was an avid outdoorsman and loved hunting, fishing and camping in Idaho. He shared that love of the outdoors with his son Sam, and soon Sam was just as enthusiastic about all the opportunities Idaho offered too. Together they have had a lot of adventures and their bond was unbreakable… Kelly always wanted to spend time with his son.

Although we are saddened by his death, his health issues had kept him from his real love, getting outdoors hunting and fishing with Sam. He is survived by his son Sam, sister Bobbi Gatke, brother Rusty Sarbacher and ex-wife Kristin Hoff. Preceding him in death are his father, Jordan Sarbacher, mother, Donna Sarbacher and brothers Teddy Sarbacher and Wayne Sarbacher. In Lieu of flowers we are letting people know that they could make a donation in his name to the Wounded Warrior Project – woundedwarriorproject.org.

A Celebration of Life will be on August 20th in Meridian, ID, details to come.

To send flowers to the family or plant a tree in memory of Kelly Sarbacher, please visit Tribute Store
Saturday
20
August